This book first came to my attention several years back when the first edition received glowing reviews, including recommendations for its use as a study guide for the CISSP exam. The third edition was recently released, and I pre-ordered it, considering it for use in my teaching of both undergraduate and postgraduate programs, as well as CISSP prep courses.

Because Linux is a multi-user system - whether operated stand-alone or as a network server - it becomes important to keep users' files separate and to enforce access controls to minimise either accidental or malicious damage to files. While this is obviously most useful in the corporate/academic world for which UNIX was designed, it is even useful in a home setting, as any parent of several squabbling children can attest! 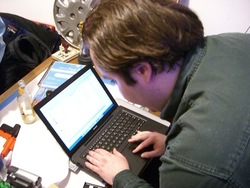 I'm preserving this, since copies of it have been disappearing off the Internet. It's a transcript of what must be the world's dumbest hacker on an IRC channel. The comments are by the original poster, who is unfortunately no longer known.

The Certified Information Systems Security Professional designation is the "gold standard" in professional security certifications. It confirms that the holder has several years' experience in two or more security-related domains and has passed a rigorous six-hour examination.